Volunteers in the spotlight

Bev Lewis and Barbara Richardson talk about why they help out at the Charity’s Head Office on a weekly basis, and encourage others to come and get involved too… 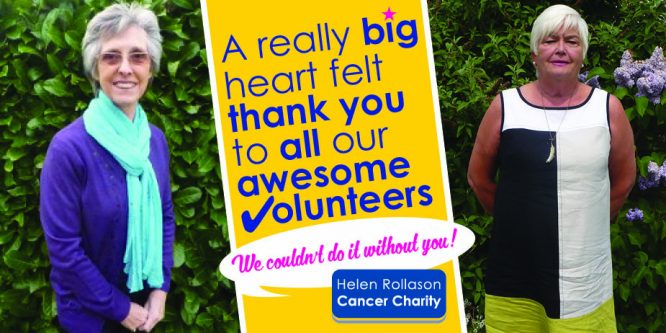 Bev: “I met Helen Rollason when she worked for Essex Radio, based in Southend. I became a professional golfer in 1978 and Helen came to interview me about this – obviously a slow week for news! She had trained as a PE teacher, so naturally sport was her main interest. From that interview we became good friends, and it was wonderful to see her career progress to become a presenter for BBC Children’s Newsround and then to become the first woman to present Grandstand on BBC. She was a bubbly character, full of enthusiasm for life, and Nicky – her daughter- was the apple of her eye.I remember meeting up with Helen for a game of golf in Southend and her telling me she was having blood tests, as she had not been feeling well since coming home from the Atlanta Olympic Games. Sadly, those tests revealed she had cancer and the fight began.

When I visited her in hospital or at home she still remained upbeat and looking for every possible approach to make her life more bearable, thus the Charity was formed. She realised that having treatment in a hospital could be offset by having some complementary therapy to make her feel somewhat better. As we now know, she lost her fight, but the legacy of the charity would really make her so happy that she had been able to help others in the same situation that she had been in.

I retired in 2007, and it was always in my mind to become a volunteer, so I made contact with the charity. My enthusiasm to help was high and so I was taken on. I usually go to the office on a Thursday and input data, mainly the Gift Aid details, onto the computer, do filing, and am happy to do anything that my meagre skills can cope with. I do about six hours a week, and thoroughly enjoy being useful to such a worthwhile cause. Volunteers in all charities gain a lot themselves, we make new friends, enjoy a laugh – most essential, and go home with a sense that in some way you have helped those who need it.

Barbara: “I retired six years ago from being a sales manager for an advertising company, and as a keen supporter of my local community I wanted to get involved with a group where I could really help to make a difference and transfer some of my skills too.

I watched BBC’s Sports Personality of the Year awards each year, and saw the award given in Helen Rollason’s name, I knew the Helen Rollason Cancer Charity were local to me, and was aware of the great work they did supporting people living with cancer. I got in contact with the team there and became a volunteer once a week in the Head Office.

I love being able ‘to give something back’, and getting involved with all the different fundraising activities that the Charity is involved with. I regularly help out at events such as the annual Vintage Fair and Ride for Helen and even recently represented the Charity at a balloon race, helping to release hundreds of balloons into the sky, it was great fun. I have also held a Tea for Helen party at my home which all helps to add to the much needed funds as all the services HRCC provides are free to patients.

The Fundraising Team at HRCC are a great bunch to work with, and if you are looking to make a difference in your local community and have a few hours to spare I would thoroughly recommend getting involved with this Charity. You’ll love it!”

Meet more of our volunteers in the coming days as Helen Rollason Cancer Charity celebrates Volunteer’s Week 2016. If you would like to know more about the volunteering opportunities at HRCC contact the Fundraising Team on 01245 380719, email fundraising@helenrollason.org.uk, or click here