After bravely battling breast cancer twice, Fiona Farrell’s life has turned full-circle and she is now helping others as a therapist for Helen Rollason Cancer Charity. Here, we tell the truly awe-inspiring story of how Fiona has overcome so many hurdles to live the life she has today. 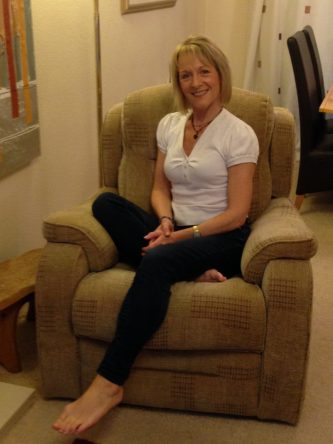 Back in 2002, life for therapist Fiona Farrell was very different. Working as a BBC radio presenter throughout the eighties and nineties, Fiona had landed a dream job as traffic and travel girl for ITV, regularly appearing on GMTV and London Tonight, and as a National Weather presenter. After making the decision to move to Hatfield Peverel, in Essex, to settle into family life with husband, Brian, and son, Brett, the family received some difficult news.

Fiona explains: “Back in 2002, Brian was diagnosed with throat cancer. I was so busy trying to look after him and our young son Brett, who has autism, that it came as a bit of a shock in the November of that year, to be diagnosed with grade one breast cancer myself. Brian was so unwell from his intensive cancer treatment that we had no other choice than to be strong and fight the disease together.”

Fiona underwent a lumpectomy, followed by radiotherapy, and fortunately both she and Brian were given the all-clear in the summer of 2003. “I remember seeing a leaflet at the hospital for the Helen Rollason Centre in Chelmsford and it caught my attention as I’d always been interested in holistic therapies. After everything Brian and I had been going through, I was left with a lot of stress and anxiety, so I found the reflexology treatments so beneficial. The centre was lovely and calming and I found it the perfect place to switch my phone off and enjoy some of ‘me-time’, away from the chaos of hospital appointments and being a busy mum.”

It was then that Fiona decided that she would like to be a therapist herself and studied for a Bachelor of Science degree in Complementary Medicine at Anglia Ruskin University. After graduating, Fiona worked as a therapist for the next 12 years, specialising in massage for children and adults with special needs, including autism.

In 2013, after discovering a lump, Fiona received the upsetting news that the breast cancer had come back. “When the consultant told me that I had invasive grade three breast cancer, it felt like I’d just been dealt a death sentence. It was such a massive blow to me and my family. But the doctors reassured me that with intensive treatment, we could beat it.” Fiona underwent a mastectomy and six months of chemotherapy. During her treatment, she came back to the Helen Rollason Centre for support. “I found the second round of treatment a lot more draining than before. The first time I was given the all-clear, I was left feeling really empowered with a new lease of life. This time, the medication had left me suffering side effects such as a loss of taste and the on-set of menopause. But the Helen Rollason Centre was a godsend – it offered much more than just complementary therapies, it was a place I could go to chat to others in a similar situation and it became a massive support to me. I met a group of lovely ladies in the lounge area and we formed a wonderful friendship. We’ve since called ourselves the ‘Après-C Club’ and meet up for dinner every six weeks”.

After overcoming breast cancer for the second time, it was a chance encounter at Hatfield Peverel train station that resulted in Fiona becoming a therapist for the Helen Rollason Cancer Charity. “I was waiting for a train with my son at the station when I bumped into Lorna Ellis, the Centre Manager for HRCC. We had a catch up and I found myself asking if there were any therapists needed at the Chelmsford centre. Working with the charity had already crossed my mind a number of times as I was not only a qualified therapist, but felt I could empathise with those using the services that were affected by cancer. Lorna invited me to come in the following week and I’ve been working there ever since.”

Fiona has been a welcome addition to the team at Rochelle House, where she works every Tuesday, and has now been asked to be involved in our exciting new Helen Rollason Cancer Charity Support Hub, which opened on 3 February this year at the Spire Specialist Care Centre in Great Baddow, Essex. Fiona holds six appointments every Friday. “It’s great to be able to offer reflexology and aromatherapy to more clients at Spire. The new space is so bright and welcoming, ideal for those who are looking to relax.”

Being a therapist for HRCC brings so much more to Fiona’s life than just work: “I never wake up thinking ‘I don’t want to go to work.’ I always know I’m going to have a nice day and that I am going to have achieved something good. Everyone deals with cancer differently and has their own story – it’s fascinating to hear those stories.” And to anyone that is considering joining Helen Rollason Cancer Charity as a therapist, Fiona adds: “Give it a go. The centres are lovely places to work and the job is so rewarding.”