I’ll be Riding High at R4H

Andrew Watson, a Sales Executive from Stansted Audi, has participated in every single Ride for Helen event and plans on upping the stakes this year by attempting the 15 mile route on his penny farthing. Here, we catch up with Andrew to find out why…

“I first heard about HRCC’s Ride for Helen back in 2014 when my colleague, Darren Thompson, from Chelmsford Audi, announced he would be putting together a team for the event. We all know somebody that’s been affected by cancer, so I was happy to be able to show my support for the Helen Rollason Cancer Charity. On the day of the event, unlike the rest of the Essex Audi team who arrived with their modern road bikes and cycling gear, I decided to do it my way; dressed head-to-toe in tweeds, riding an old-fashioned town bike.

“I’ve always been fascinated by bygone eras and love historical re-enactment (I’ve even got an English Civil War style Pikeman’s armour hanging on my wall), so it was natural for me to take a more classical approach to the ride. And there was such excitement over my outfit that in the years that followed, I found people asking ‘What are you going to go dressed as this year?’ So in 2015 I dressed as a French onion seller with a baguette and bottle of wine in my basket, and in 2016 I cycled for 15 miles in the scorching heat, dressed as a George VI police constable.

“This year, I’ve decided to try something completely new and attempt the 15 mile route on my recently purchased penny farthing. I commissioned a fantastic local cycle maker, Edwin Knight, to create me my 54” custom-made penny farthing in the summer, after a colleague of mine suggested I give riding one a go. After my first practice, I was completely hooked and had mastered the art well enough to go out on the roads. I love the character and charm of the penny farthing – they were only built between the 1870’s and the 1880’s so had a relatively short life-span, but they were like the Ferrari of their day. It’s great to see the smile on people’s faces when you ride past on one today though.

“In order to complete the route safely, I’m going to have to plan ahead and do a few trial runs. The main hazards I’m going to have to overcome are hills and the high centre of gravity, as well as the fact that the penny farthing needs a surprisingly wide berth. But I’m sure it will all go nice and smoothly.

“I’d 100% recommend anyone considering taking part in Ride for Helen to do it – it’s such great fun! Now that the ride has a six-mile route, it’s ideal for families with children to get involved. The atmosphere on the day is wonderful, from start to finish, and it’s a brilliant way of getting out in the beautiful Essex countryside. Plus the best part is that you can raise money for such a wonderful cause.” 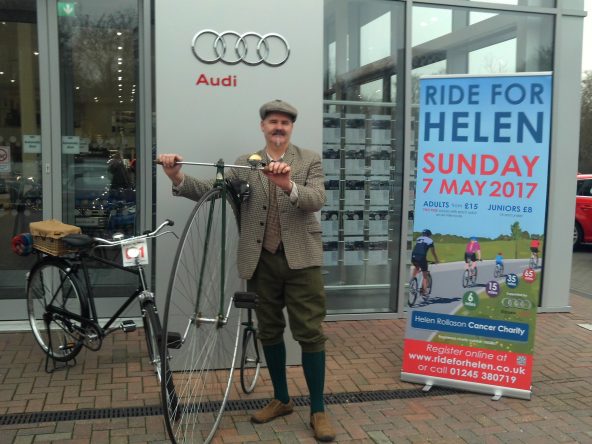