After receiving support from HRCC following her breast cancer diagnosis, Ruth Gilbey decided to raise money for the Essex-based charity with #RuthsPlaylist. The playlist is made up of songs suggested by the public in return for a donation, and it will be played to Ruth’s surgeon during her mastectomy surgery next year. 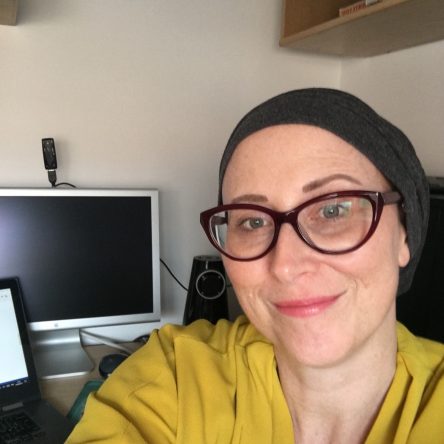 In April this year, Ruth Gilbey was diagnosed with Stage 2 Grade 2 breast cancer. Since then, Ruth has undergone a course of chemotherapy, which she responded well to, and is due have a mastectomy and breast reconstruction early next year. After receiving counselling and reflexology at the HRCC Cancer Support Centre in Edmonton, Ruth came up with her innovative fundraising idea #RuthsPlaylist, along with the help of a marketing network she is involved in called Digital Mums.

Here, Ruth explains: “I knew I wanted to give something back (to HRCC), there was never any doubt in my mind! I thought I’d do it after my treatment though, not during, but it’s actually been an amazing way of helping me get through the treatment. I’d thought for a while about the #RuthsPlaylist campaign, submit me a song to cheer me up type of thing, but hadn’t connected it to fundraising.  Then my friend Nicole Andrew contacted me with an inspired fundraising idea. Her idea was to put on a fundraising event and asked if I’d like to choose the charity. So that inspired me to fundraise using the playlist campaign, too. Submit a song and donate a minimum of a £1 per entry.

“It was my surgeon who actually told me my diagnosis, and I was lucky that she has the best bedside manner ever. She took as much time as I needed to answer my questions and reassure me. I remember vividly at our third appointment her explaining the nine-hour surgery to me and how she liked to listen to music while doing her surgeries. She then suggested I made a playlist for her, along with my six-year-old twin boys. Nine hours? That’s about 150–200 songs, right? Perhaps she only meant a short playlist, but I thought I’d surprise her with a ‘help me (and her) stay positive’ playlist. I thought about how much music helps us through those difficult times. How recently I’ve blasted music in my car and danced round the house to get me through this tricky period. Well it’s better than hiding under the duvet, right?

“The fundraising event is an awards evening for another supportive group that I’m part of called Digital Mums, and will be raising money for HRCC. In February 2015 I retrained with Digital Mums – they upskill mums to be social media managers. They are campaigning for fairer working conditions for mums and flexible working for all. Doing the course has literally changed my life and I am now a member of the closed Facebook community called the DMCollective. So Nicole decided why not celebrate this group with the DMCollective Awards and put on a great night for them and fundraise for HRCC. Perfect.

“There are eight of us who work every day on planning the event, sourcing sponsors and promoting what we do. And so many more from the DMCollective community who’ve helped get sponsors and supported what we are doing – all to raise money for HRCC and celebrate an amazing community.”

Ruth first visited the HRCC Cancer Support Centre to help her deal with her diagnosis and impending chemotherapy and says she found the treatments to really beneficial: “HRCC was recommended to me by various people; cancer patients, therapists and doctors. I’d actually had a few problems getting counselling and had been told things like I’d have to wait three months or self-fund. When I called HRCC they said I could see a counsellor that week – it was such a relief after a lot of phone calls and mountains of appointments.

“I’d been newly-diagnosed so was in shock as well as dealing with impending chemotherapy. Also beauty salons were too nervous to treat me for massage and other therapies. I felt like I was being turned away or turned down a lot, then HRCC at the North Middlesex Hospital in Edmonton said ‘no problem we can help you’.

“Since then, I’ve had counselling and reflexology. The treatments have been a complete lifesaver at getting me through my chemo. Also, I have a reflexologist who’s also had breast cancer and had similar treatment to me. She does my reflexology and it’s really reassuring that she understands what I’m going through. I also think you need mental strength to get through chemotherapy so the counselling has helped me stay mentally strong and not get depressed or too anxious. I want to start going to the support group and join the weekly Pilates class too through HRCC.”

So far, Ruth has raised an incredible £3,500 through the #RuthsPlaylist campaign, and it’s still going. The DMCollective are also organising an online auction and preparations for the DMCollective Awards are in full swing: “We are in the process of securing sponsors so that we don’t have to use the money from the ticket sales of the event for expenses as we want to give as much as we can to the charity (while also putting on a great night for the community who’ve helped put this together). It’s looking good and we are talking to the perfect sponsor for a community of 1,000+ social media managers.”

When asked why Ruth decided to choose HRCC as the beneficiary of her playlist and the awards, she says: “Simply because HRCC was there when I needed them and they have given me and so many other cancer sufferers vital support. I’d felt like been turned away a lot and then I finally found a place that would support me and understand what I needed.”

If you would like to nominate a song for #RuthsPlaylist please visit: http://www.justgiving.com/fundraising/ruth-gilbeyandthedmcollective

DM Collective Awards is sponsored by ContentCal http://www.contentcal.io. For the full list of sponsors visit: http://www.gowiththepro.uk