“I don’t know what I would have done without HRCC being there.”

Jackie Jones, 50 from Wood Green tells us about her cancer journey and how the Helen Rollason Cancer Charity helped her when she needed it the most.

“My name is Jackie Jones, and I am a Mother, Grandmother and Great Grandmother. 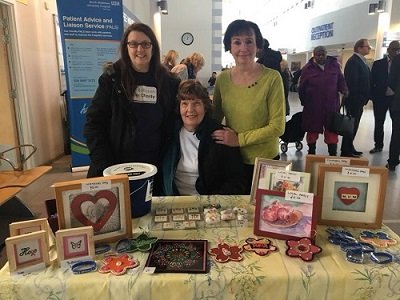 10 years ago my cousin had breast cancer and had a mastectomy. It was a few months before I was due a mammogram as you are unable to have one until you are 50.

My cousin encouraged me to go to my local GP but he couldn`t find anything. I was appointed to North Middlesex Hospital and they couldn`t find any lumps and nothing unusual, but I kept on insisting so he allowed me a mammogram.

This showed up something and I had a biopsy the same day. When the results came back I discovered I had breast cancer. Next I had a lumpectomy, then 6 rounds of chemotherapy, which was so strong it sent my body into shock and I was rushed back into hospital and put on a drip. Afterwards they lowered the dose and it was better, although I didn’t want to lose my hair and the blisters and pain was awful. After that I had 25 courses of radiotherapy and then prescribed tamoxifen for 5 years and then got discharged.

Later on I had another scan which showed the cancer had now spread to my liver and axillia which was another shock, so more surgery for liver ablation 4 times and cryotherapy to axillia which unfortunately had left me with damage to my hand. I now can’t grip and have muscle wastage, but the good thing is I am still alive and will never give up. 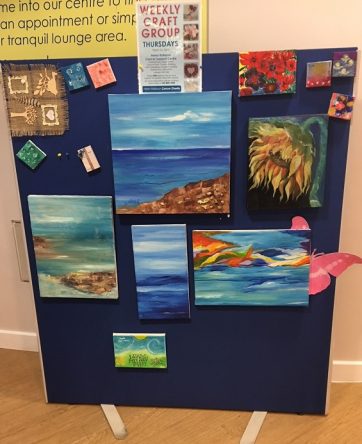 This is because of my family and friends who keep me positive and although I might have one bad day, most of them are good days. At the moment I am having injections once a month and so far the three cancers in my liver are shrinking so that was really good to hear, and I hope they will go.

10 years ago I started to go to Helen Rollason Cancer Charity Support Centre at North Middlesex Hospital for treatments where you can get 45 minutes to yourself, so you don’t have to worry your family. I’ve also had some counselling which has really helped.

At the Support Centre I met a lady called Zohreh who wanted to start an art class, and wanted poetry to go with her paintings. I told her I wrote poetry and did some for her there. I met Adele and Kate and other ladies and we have all become friends.

This Art Group has really helped us all. The staff are brilliant and friendly and always take the time to talk to us and ask how we are. Also if we have appointments and have no one to come in with us, Maria Fleet and Rebecca Brainard the centre coordinators will come in and this is such a great help, and so kind of them. I feel this Support Centre has helped me so much in the last 10 years, and I wouldn’t know what to do without them being there.

I would like to thank everyone for all the help and support I have been given by them, and if my cancer ever comes back I will continue to go to the Support Centre.”

Helen Rollason,
Saved my sanity,
I stressed, I cried,
I worried too much,
But counselling, reflexology
And just a chat
A smile, a cup of tea
Art classes, friendly faces
Had meant the world to me
Who could ask better than that

If you would like to talk to someone about making an appointment at the North Middlesex Support Centre, please call the centre co-ordinators
Maria Fleet, or Rebecca Brainard on 02088 872408.