Patricia Rouse, 76 from Hornchurch tells us about her cancer journey and how the Helen Rollason Cancer Charity helped her when she needed it the most. 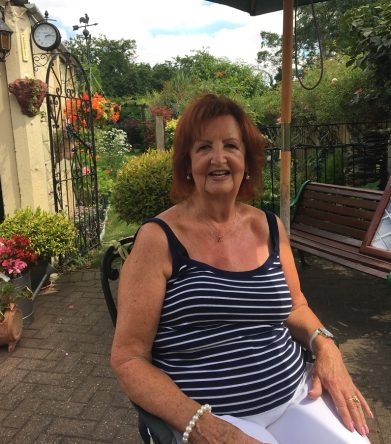 My husband and I were out with friends on the night I found the lump; I’ve never sobered up so quickly in my life.

It was 2002 and I was only 60, too young to have breast cancer, or so I thought. I’d only just retired from my City job and had so many exciting plans ahead, places we wanted to travel, time to spend with our son and daughter, to tend our beautiful garden. This wasn’t in our plan.

But we visited Hartswood Hospital in Brentwood where it was confirmed to be cancer. Only people who have been diagnosed will know what a gut wrenching and terrifying feeling it is, however after the initial shock we had to set about making a new plan with our medical team about how to beat this cruel disease. We had a positive attitude and were determined to face it head on.

First was a mastectomy, then I was able to have chemotherapy in the comfort of my own home with the expertise of Professor Neville Davidson watching over me. The nurses were brilliant and my daughter was with me throughout every treatment. We’d lived in Hornchurch since 1971 so had a close-knit group of friends and neighbours who were also a huge support.

The chemo had been a success; we had our lives back and I was able to plan our future again without worry. Fast forward to 16 years later, I heard about the Helen Rollason Cancer Charity through my association with Professor Neville Davidson. Their free cancer support services really struck a chord with me and I immediately wanted to get involved with raising funds.

I had always been a bit of a wordsmith from my days working as a Secretary at Barclays Bank in London; writing little rhymes in birthday cards, I even had over 20 poems published in the Daily Mail. I enjoyed writing poetry and thought about putting together a book to be sold with all profits going to the Charity. I was a little anxious that no one would buy it! However my daughter encouraged me so I set about to make it my mission.

A Life of Rhyme; I was so proud, I had completed my first poetry book. A kind gentleman at the local council offices helped me get 200 copies printed, and I signed every one of them. Every single one sold raising £1,150.00 for the Helen Rollason Cancer Charity. My friend even sent one to her cousin in France who had lost his wife to cancer. He was so moved by my poems he donated £50.

Today I am still cancer free and count my blessings; I’m so pleased to have been able to help others going through their own cancer journey. I know first-hand just how important support can be and the Helen Rollason Cancer Charity are a fantastic cause doing just that.

I’ve lost a close friend,
But it’s not quite the end,
There’s another one waiting nearby,
We grew up together,
Like birds of a feather,
So it was difficult saying goodbye.

When I was small,
It didn’t matter at all,
Then puberty came and things changed,
How big would I be?
With cups ‘A’ ‘B’ ‘C’ or ‘D’,
When my body was then rearranged.

But you did me quite proud,
And at least you allowed,
Me to nourish two babies and so,
Tis with a real heavy heart,
That we have to part,
And sadly I have to let go.

But now a new friends turned up,
To fill one empty cup,
Named Prothesis would you believe,
I look just the same,
And I’m back in the game,
It’s amazing what one can achieve!