“Being a mother to Erin and trying to explain to her that mummy was poorly proved quite challenging”.

Karen Willis, 40 from Ingatestone shares her cancer story and how the Helen Rollason Cancer Charity helped her through her treatment.

It was October 2017 when I found a lump in my breast while showering; thinking it may be period related I didn’t go to the doctors to get it checked until the December. A week before Christmas I was diagnosed with Stage Two breast cancer.

My nan Bridget had died at 52 of the same disease so you could imagine how terrified I was. With my then three year old little girl Erin and husband Paul I was determined to battle the cancer head on. In the new year my treatment plan commenced at Springfield Oncology Centre with six rounds of chemotherapy, 18 rounds of Herceptin, a lumpectomy and later radiotherapy. The doctors stated that my treatment had a 90% success rate and they were positive that the cancer had been caught early on, much to my relief.

Initially I found it hard to tell people about my diagnosis; I didn’t want to worry anyone as my success rate was good, but at the same time I knew I couldn’t hide it, especially when you know you are going to lose your hair. I told my close friends and family but I tried to keep it private as much as I could. I certainly didn’t want people to feel sorry for me. My parents were obviously very upset; they had both lost parents to cancer at a young age. They found it hard to know what to do but they soon realised I didn’t want them fussing.

The first chemotherapy session was the scariest; I’ve never felt so worried about what might happen. I thought I would be really unwell and it was such a relief that I didn’t feel too bad. Through every session my husband would come with me to support me and my parents also came along every now and then. Fortunately, I had very few side effects including tiredness, a strange taste in my mouth and I lost quite a lot of my hair. I used the cold cap which helped me at least retain my fringe which I styled with various hats and scarves. I tried a wig but felt it didn’t suit me so I ended up donating it to HRCC.

Being a mother to Erin and trying to explain to her that mummy was poorly proved quite challenging; the ladies at HRCC suggested I use one of their borrowed books called ‘Mummy’s Lump’ which helped immensely. I would recommend it to anyone going through cancer and have young children.

It was around this time that one of the chemo nurses mentioned to me about Helen Rollason Cancer Charity and the valuable work they do in the local community. I attended their Chelmsford support Centre, now based at Hatfield Peverel, for reflexology with the wonderful Jo. The therapies I received were so beneficial to alleviate the side effects of my treatment. I rang the bell at the hospital to signify the end of my treatments; what a relief. I continued visiting HRCC regularly and even just sitting talking to other clients in the lounge helped me to feel less anxious. I can’t speak highly enough of everyone at the charity as they have proved a lifeline for me.

To give something back to this amazing charity I have volunteered at their Mid Essex Support Centre on their reception to welcome clients through the door, and also my husband and I took part in the Three Peaks Challenge; conquering Snowdon, Scafell Pike and Ben Nevis in under 24 hours raising a total of £3k!

Thanks to the charity, I have been inspired to train as an Apanaveda yoga instructor after attending the amazing yoga sessions run by Sarah at the Mid Essex Support Centre. I will never forget the charity’s kindness. 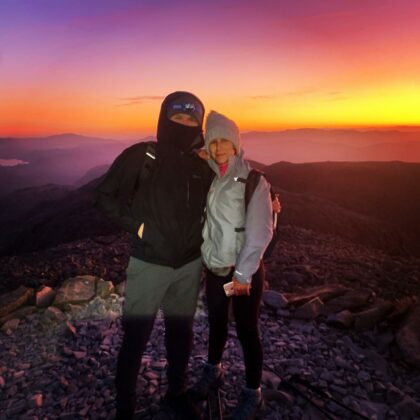