“With the invaluable support from the charity we have been able to keep positive and enjoy life as best we can”.

Janet James, 82 from Bishop’s Stortford shares her cancer story and how the Helen Rollason Cancer Charity helped her through her treatment.

I was a teacher for 40 years at Brays Grove Community School in Harlow before retiring in 2009. I also met my husband Ray at the school and we have two sons together. I was just beginning to enjoy my retirement when in March 2010 I discovered a lump in my breast.

I immediately went to the doctors who referred me to Nuffield Hospital in Cambridge; I was later diagnosed with breast cancer. I had a lumpectomy, followed by a mastectomy where three lymph nodes were also removed and tested positive for cancer. Later I underwent radiotherapy but sadly this would not be the last time that cancer and I would meet.

In November 2011 I discovered a lump under my arm, again I was tested and it was found to be cancerous but they also found lumps on my lungs. I was put on Taxol which is a chemotherapy medication that is used to shrink the tumour while ten more lymph nodes were removed, along with the lumps on my lungs. I was to continue having CT scans every few months to ensure no other tumours showed up, however more tumours were found in my chest and neck which turned out to be inoperable. 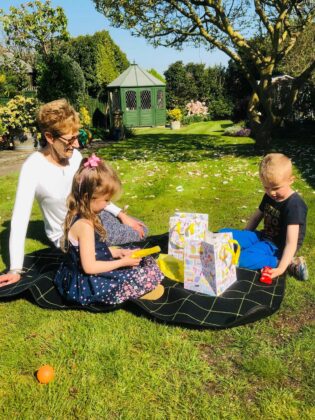 At Ipswich Hospital in 2012, I endured a Radiofrequency ablation which is a medical procedure where part of the electrical conduction system of my tumours is removed using the heat generated from a medium frequency alternating current. I was also to take more chemotherapy drugs called Capecitabine which came with some awful side effects; fatigue, hair loss and food just didn’t taste the same. I started taking Tumeric in paste form which did help but I needed something for my mind as well as my body.

I was introduced to the Helen Rollason Cancer Charity initially at the Rivers Hospital in Sawbridgeworth; therapists Claire and Rachel have always been there for me. It has been so wonderful to talk through my feelings and emotions without having to burden my own family.

At the Support Centre I feel like I can totally relax and it makes me feel I am not alone. For now I try not to think too much about the future and I try to seize every opportunity which comes my way. My husband Ray and I have been through a lot together with my cancer but with the invaluable support from the Helen Rollason Cancer Charity we have been able to keep positive and enjoy life as best we can.