“The charity has been invaluable to my emotional well-being; without them I don’t know where I would be now”.

Sharon Cane from Hatfield Peverel shares her cancer story and how the Helen Rollason Cancer Charity helped her through her treatment.
During a routine mammogram examination, my doctor asked me back for a further appointment which I thought nothing of having had this happen before. It was 2019, before the pandemic so I was able to be seen and sent to Broomfield Hospital for a biopsy within a week.
My husband John had asked me if I wanted him to join me for the appointment which I initially declined, but later on accepted and boy was I glad I did. I remember entering the oncologists office and thought it was unusual to see so many nurses joining us as well; alarm bells began to ring and I think John felt it too. 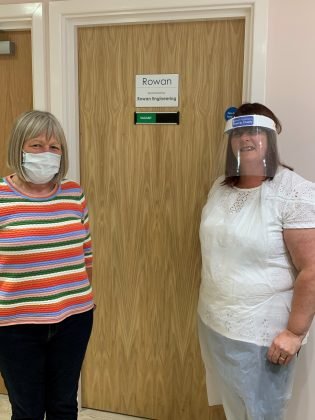 The diagnosis was breast cancer; two tumours which were high grade and fast growing. I felt numb with shock but thank goodness I had John supporting me. The nurses were wonderful too, holding my hand and with kindness in their eyes. The oncologist continued to explain that I needed a mastectomy operation and fast, but I had to make a decision about if I wanted my breast to be re-constructed. I decided later to undergo a procedure called DIEP (deep inferior epigastric perforators) where tissue from my abdomen would be used to re-create my breast.
It was six weeks from diagnosis to being operated on; I was so fortunate at the speed the hospital was able to treat me. During the operation the doctors also made the decision to take out lymph nodes from under my arms to determine if the cancer was spreading and if so, at what rate. Fortunately it hadn’t which was a huge relief and I counted myself lucky.
The recovery process was long and painful; before cancer I was physically fit, always active and loved the outdoors. I had to learn to take it easy for once and this was a challenge; I couldn’t even pick up my beautiful grandchildren. Years previous I had undergone a hysterectomy which had removed some of my hormones; because of this I did not need to have chemotherapy or radiotherapy – another big relief. I just had to concentrate on healing and getting back to my new normal – whatever that was!
I was feeling physically stronger day by day but I needed something to help with my mental health; from diagnosis to operation it had been only six weeks and I was now beginning to process the emotional side of what had happened. One of my cancer nurses had mentioned Helen Rollason Cancer Charity to me and I decided to look into their services.
I visited the Mid Essex support Centre in Hatfield Peverel and met the lovely Hazel; the ironic thing being before my cancer diagnosis I had just started volunteering for the charity, living only a few streets away. Never did I think I would have to call upon their services myself. I had also attended their Open Days so was familiar with a few faces and felt comfortable from the minute I walked back into the centre. 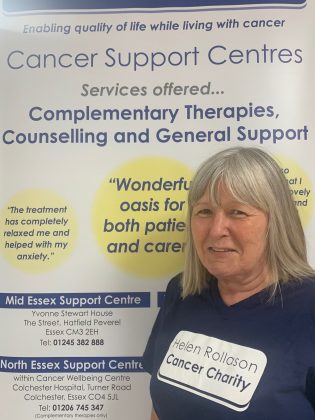 I had reflexology treatments in early 2020 with the wonderful Fiona and Nicola which helped me sleep so much better and I felt I could focus on things easier than I ever had before. I could open up to the ladies about my worries and my fears without judgement, and without burdening John who was such a pill
ar of strength to me.
I knew something wasn’t quite right in my stomach but hadn’t shared anything with anyone. To my surprise, during one of my reflexology sess
ions, Fiona noticed something in my feet which confirmed how I had been feeling. I gained the confidence to go to the doctor and my issue was dealt with immediately.

Then we went into lockdown and as I couldn’t continue my treatments, I started telephone counselling with the fantastic Wendy; the charity kept in touch with me throughout 2020 which I appreciated so much. Speaking to Wendy I was able to verbalise how I was feeling and helped me put everything into perspective.

Now HRCC is starting to hold their fundraising events again I have been able to give back to the charity by most recently volunteering at their annual Vintage Day Out; it makes me feel so good to know I am helping someone else through their own cancer journey. I am 64 now and it has been almost two years since my operation and I am still physically healing, but Helen Rollason Cancer Charity has been invaluable to my emotional well-being; without them I don’t know where I would be now. All I can say is thank you and you helped me find my way in life again.