Arsenal and Scotland defender Jen Beattie has been honoured with the Helen Rollason Award at BBC Sports Personality of the Year 2021.

Beattie, 30, was diagnosed with breast cancer in October 2020 after discovering a lump, but continued to play for club and country. 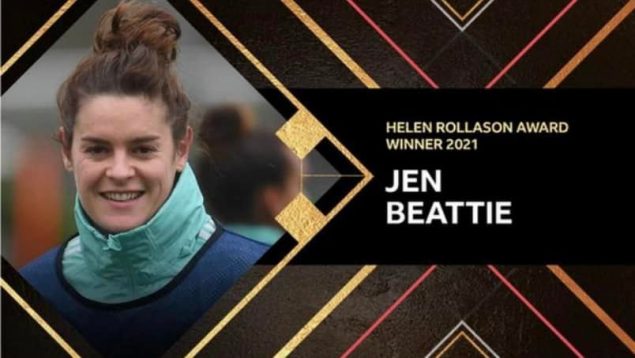 She is now cancer-free and uses her platform to speak about her experience and encourage others to get screened.

“Getting told you have cancer is a life-changing moment,” she said.

“It was horrific, there is no other way to describe it, especially in the middle of a pandemic when you don’t have your friends and family there with you.”

She added: “Even being able to say the words ‘cancer free’ is just the best feeling.”

Past winners of the award are:

Captain Sir Tom Moore was honoured with the Helen Rollason Award at the BBC Sports Personality of the Year show.

In April, the veteran raised more than £32m for the NHS by walking 100 laps of his garden before his 100th birthday. 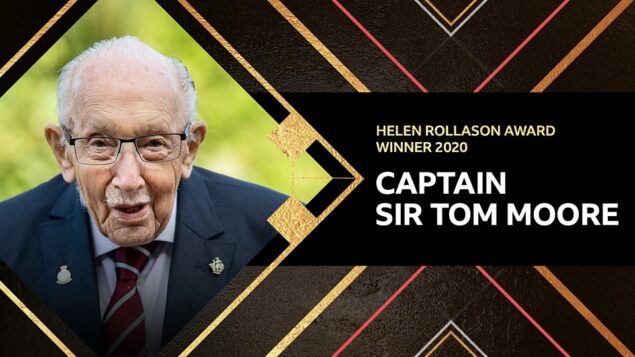 His feat saw him awarded a knighthood by the Queen in a “unique ceremony” at Windsor Castle following a special nomination from the prime minister.

Boris Johnson said at the time Capt Sir Tom “inspired the whole country” and is a “true national treasure”.

He was presented with the award by Dame Jessica Ennis-Hill.

“This really is a magnificent award,” he said. “I never ever anticipated I would receive this award.”

Scotland rugby union great Doddie Weir was honoured with the Helen Rollason Award at the BBC Sports Personality of the Year show on Sunday.

Weir, 49, was diagnosed with motor neurone disease (MND) in 2016. The following year, he launched his charity, the My Name’5 Doddie Foundation, which seeks to aid research into the disease and improve the lives of those with MND. The former Melrose and Newcastle Falcons lock won 61 caps for Scotland.

British racing driver Billy Monger has been honoured with the Helen Rollason Award 2018 at the BBC Sports Personality of the Year show. Monger, 19, had both his legs amputated following a crash during a Formula 4 race at Donington Park in April 2017. He returned to racing in March 2018 – less than a year after the accident – at the British Formula 3 Championship.

Bradley Lowery was posthumously given the Helen Rollason award at the 2017 BBC Sports Personality of the Year Awards. Bradley was a fan of Sunderland football club and captured the hearts of the nation with his regular appearances on the pitch with best friend Jermaine Defoe. Bradley’s parents Gemma and Carl attended the ceremony to accept the award on his behalf.

Ben Smith has been presented with the Helen Rollason Award at the 2016 BBC Sports Personality of the Year Awards. Ben ran 401 marathons in 401 days in order to raise awareness about bullying. His 401 Challenge has raised over £310k for anti-bullying charities, and he has inspired thousands of people, including the school children that he visited at 101 schools.

8-year-old Bailey Matthews, who has cerebral palsy, completed his first triathlon, throwing away his walking frame to complete the last 20 yards of the final running event on his own.

Anne Williams was a tireless campaigner for a new inquest for her son Kevin, who died in the Hillsbrough football disaster.

Martine Wright lost both of her legs in the 2005 London bombings. She adopted a positive and determined attitude to her recovery which led, only seven years later, to her competing as a member of Team GB’s sitting volleyball team at the London 2012 Paralympics.

Bob Champion overcame cancer to win the Grand National in 1981, riding Aldaniti. He then set up the Bob Champion Cancer Trust in 1983 – raising millions for research into male cancers – and continues to be an inspirational supporter of this cause.

Sir Frank Williams (Formula One) founded the Williams Formula One team, which has won numerous constructors’ and drivers’ championships, despite suffering a severe spinal cord injury in an accident in 1986.

Major Phil Packer (marathon, Channel rower and mountain climber) for raising more than £1.2 million for the Help for Heroes charity, despite being paraplegic since sustaining injuries in the Iraq War.

Alistair Hignell (cricket & rugby union)  for fundraising and raising awareness of multiple sclerosis since being diagnosed with the disease in 1999.

Oscar Pistorius (athletics) for his fight to be allowed to race in both the Olympics and Paralympics 2008.

Paul Hunter (snooker) awarded posthumously in recognition of his bravery and determination to continue playing while battling cancer.

Geoff Thomas (football) for raising more than £150,000 for Leukaemia Research by cycling, following his own battle with the disease.

Michael Watson (boxing) for completing the London Marathon and raising millions for the Brain and Spine Foundation despite being told he would never walk again.

Jane Tomlinson (amateur athlete in marathons and triathlons) for completing the London Marathon, a triathlon and Great North Run while raising money for Cancer Research, after being diagnosed with breast cancer.

Ellen MacArthur (sailing) for her courage in becoming fastest woman to circumnavigate the globe.

Jenny Pitman (horse racing) for one of national hunt’s greatest trainers, who retired in 1999 after suffering from cancer.

You can also donate via: