Robert Tiffen decided to raise funds for HRCC by cycling from London to Paris in July. Here, in his own words, Robert tells us about his four day challenge:

“I have wanted to complete a cycling challenge like this for quite a while. We set off from Crystal Palace very early on the Wednesday morning, feeling full of nerves and adrenaline. After some south London traffic, we were soon in the Kent countryside and made good progress, arriving at the holding point (a pub on the outskirts of Kent) at about 4pm for the first of many well-earned pints! We then all got the ferry together to Calais and ended the day with a night time cycle through the port to reach our hotels.

Day two took us from Calais to Abbeville, and was our first experience of the beautiful French countryside – and the not so beautiful French hills. This was the most hilly section of the ride and I certainly felt that the hours I had put in at the gym simulating hill climbing on the watt bike were paying off. I teamed up with a group of guys from London and Edinburgh and we rode together for the rest of the trip.

Day three was from Abbeville to Beauvais and although we were all feeling tired, our bodies had gotten used to the hours that we were spending on the bike and we found that our average speed was increasing. I also started to earn a reputation for attacking the hill climbs – not bad for a Norfolk cyclist! The last day took us into Paris. We cycled about 50 miles then slowly wound our way to the Arc de Triomphe and round to the Eiffel Tower. I must admit I was feeling very emotional when we arrived. We then had a celebratory meal before spending a day exploring Paris and getting the Eurostar home. I managed to raise £1,673 for the charity and had a fantastic experience.” 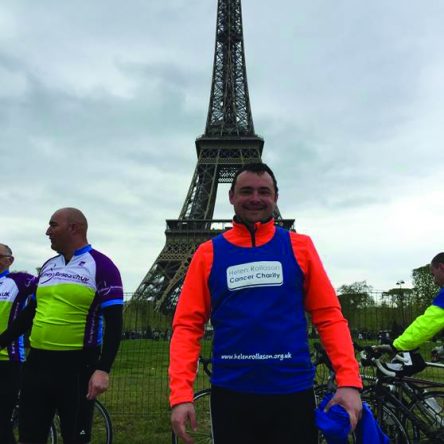